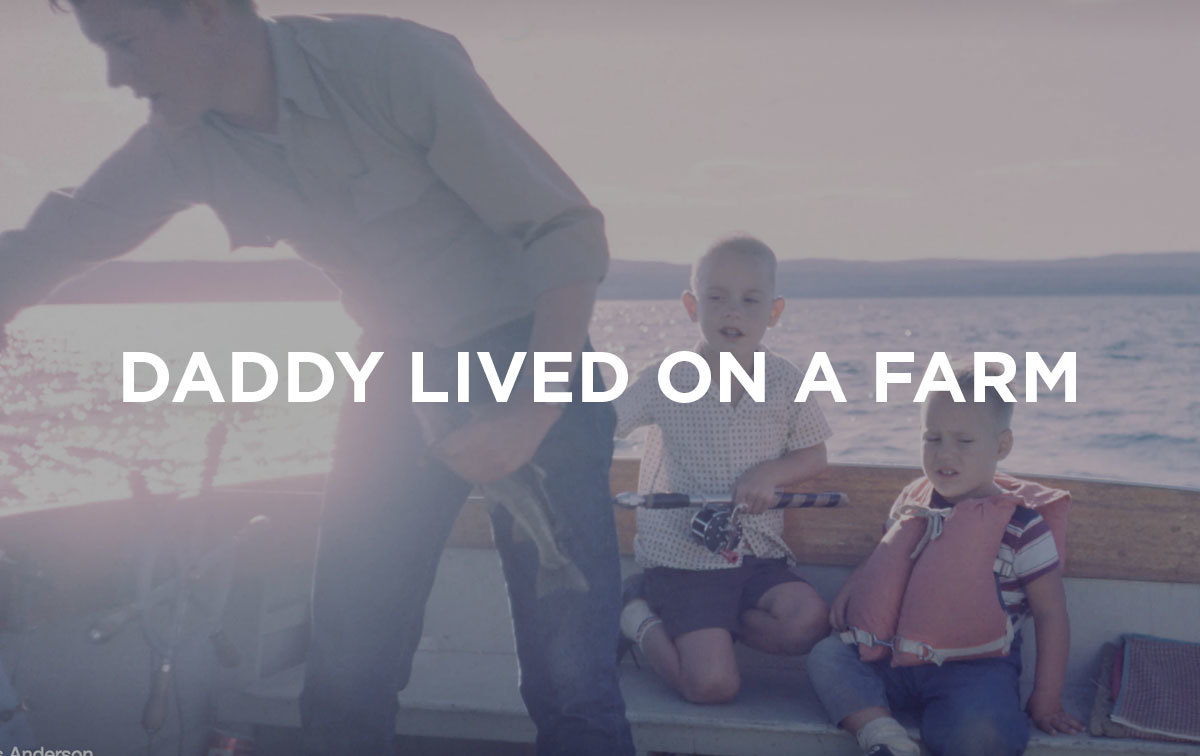 10 Jul Daddy Lived on a Farm

About four years ago, I was on a vacation in the Adirondacks. I was sitting outside by the fire with a few parents of children just on the edge of adolescence. By the end of high school I had realized that, because my father and I have a generally chummy relationship, people were going to ask me for a child’s perspective on good parenting for the rest of my life.

As I said, I was sitting around at night, an unsupervised 18 year old being consulted for parenting advice. There was one couple whose faces began to look more and more tortured as the conversation continued. It seemed as though, staring into the fire, the magnitude of their task and their penchant for failure was slowly dawning on them. Maybe they had a problem child, maybe they had five—I don’t know. But I do know that they looked sea sick by the time one of them said:

“When you got into trouble growing up” which never happened of course “did you find it helpful if your parents told you a story about how they had gotten into trouble too? You know, did it sort of help you feel like they knew where you were at?”

For the first time in years, I thought back to the stories my father told in my childhood. I do not know why they had fallen so far from memory, but that night in July, a flood of memories came back to me—memories that I was sad to have set aside for so long.

When my sisters and I were children, we loved my father’s “farm stories.” Until the beginning of high school, he and his two older brothers grew up on a dairy farm in the tiny town of Neenah, Wisconsin.  My father describes Wisconsin as “A great place to be from.” It snowed 13 months out of the year, and had about as much culture as the frozen foods section of a Kroger.

Even so, as children, we found stories about the farm endlessly captivating. If we were not ready to sleep, we would pile the sibling resistance into one bed and demand my father tell us, “Farm Stories.”

“Tell us the one where Uncle Fred knocks your head into the milk-vat!”

“Tell us about when you rided the neighbor’s dog!”

“Or how you built a boat on the snow pond!”

No matter what story he decided to tell us, they all started the same way: with a little chant that, over the years, we had composed.

“And a horse named…”

And then he’d begin. The back-and-forth took us all the way to Neenah, Wisconsin, a town so small it doesn’t appear on Google Earth, and, still somehow so large for us, it captured our hungry imaginations.

The more think back on the Farm stories the more meaning they haven take on for me. When I eventually came to the odd realization that my parents were humans too, these stories gave me a connection to the man who had raised me. No matter the current stress or ease of my relationship with my dad, I had these stories and the person within them. I fell in love with this image of my sisters and me, bundled up in my parents’ comforter, chanting, “with a dog named JINX and a cat named FIGARO!” I loved this image of my father, taking half an hour before bed, to sit with his children and share the stories of his youngest heart.

So, that poor couple by the campfire—I asked them in response, “Is that the only time you tell your kids your stories? When they’re in trouble?” The slate-blank stare I received led me to believe the answer to my question was yes.

“When I was a kid my dad would tell me lots of stories. About growing up on a farm. About moving high schools. About meeting my mom in seminary. As I get older, the meaning of those stories change for me. They become more relevant. But I think they’re also foundation to my relationship with my dad. I think you should just tell you kids stories all the time—in trouble, before bed, in the car. Knowing stories about your parents is an integral part of having a good relationship with them as you journey through life.”

I wonder if it’s any accident then that the Bible is—for the most part—stories about God, about a God whom Jesus calls Father. Maybe those stories in there, from “In the Beginning” to the New Jerusalem. Maybe with those stories and the Father about whom they are written, we think that God’s interest in us is peaked only when we are in trouble. He comes out of His heavenly office, only to find our hand in the cookie jar; He scolds us, maybe tells us to read Leviticus, and then goes back to answer more cosmic emails. But the Father of Jesus and the God of our faith is more like the father who bundles his children in his comforter and begins with, “Daddy lived on a…”